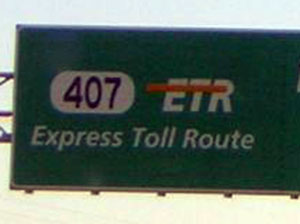 407 ETR Concession, the company that owns and runs most of Ontario’s Highway 407 – an open access highway – has lost a key tool to enforce payment of tolls, the Supreme Court of Canada held in the case of 407 ETR Concession Co. v. Canada (Superintendent of Bankruptcy).

Until the ruling, under s. 22(1) of the 407 Act – an Ontario provincial statute – if a person failed to pay a toll debt, ETR would notify the Ontario Registrar of Motor Vehicles. Upon receipt of this notice, the Registrar was required to refuse to issue or renew the debtor’s vehicle permit until he or she was notified by ETR that the debt and related fees and interest were paid, even if they had declared bankruptcy.

The question on this appeal was whether the Registrar could continue to refuse to renew an individual’s vehicle permit subsequent to a discharge in bankruptcy pursuant to s. 178(2)  of the Bankruptcy and Insolvency Act  (“BIA ”) – a federal statute. The BIA holds that a discharge from bankruptcy releases a debtor from claims that are provable in bankruptcy. One such individual, “M,” sought an order that his toll debt had been released by his discharge and an order compelling the Ontario Ministry of Transportation to issue his vehicle permits. In other words, the Supreme Court had to decide whether the concurrent operation of the provincial 407 Act and the federal BIA resulted in a conflict.
The motions judge concluded that the 407 Act was not in conflict with the BIA  and he had no jurisdiction, absent a conflict, to order the reinstatement of M’s vehicle permits.

On appeal, the Ontario Court of Appeal declared the specific section of the 407 Act inoperative to the extent that it conflicted with the BIA ’s purpose of giving a discharged bankrupt a fresh start. The Supreme Court of Canada agreed: Section 22(4) of the 407 Act is constitutionally inoperative to the extent that it is used to enforce a provable claim that has been discharged pursuant to s. 178(2)  of the BIA .

The Supreme Court was tasked with determining whether it was possible to apply the provincial law while complying with the federal law. On the one hand, the effect of the 407 Act was to allow ETR to enforce the collection of toll debts. Part of the reason for this protection is that because there are no toll booths or other barriers restricting access to Highway 407, ETR would have no effective compliance mechanism without plate denials. Drivers on Highway 407 either have transponders in their vehicles or else a photo  is taken of their licence plate and they are billed later.

On the other hand, pursuant to the BIA, creditors like ETR cease to be able to enforce their provable claims upon a bankrupt’s discharge.

Before the Court was the fact that ETR was faced with this clear prohibition under the BIA.  Since s. 22(4) of the provincial 407 Act provided ETR with an administrative enforcement scheme, it was impossible for ETR to use that remedy while also complying with s. 178(2) of the federal BIA.

The Supreme Court held that both laws could not apply concurrently or operate side by side without conflict. The inconsistency was clear and definite because one law allowed what the other precisely prohibited. The operational conflict offended the doctrine of federal paramountcy.

The operation of the provincial 407 Act frustrated the federal Parliament’s purpose of providing discharged bankrupts with the ability to financially rehabilitate themselves. The intent of the federal bankruptcy statute is to permit a debtor to no longer be encumbered by the burden of pre-bankruptcy indebtedness. The effect of the provincial 407 Act, however, was that it allowed ETR to continue burdening a discharged bankrupt until full payment of the debt. The Supreme Court held that had Parliament wished to exempt ETR’s toll debt from the bankruptcy process, as well as from the consequences of a discharge, it would have done so expressly in s. 178(1), which it did not.

In a dissenting opinion, two justices of the Supreme Court opined that the two laws had different contents and provided for different remedies. They could operate side by side without operational conflict. If a debtor chose not to drive, the province could not enforce its claim. If 407 ETR opted not to notify the Registrar, s. 22(4) of the provincial act would not apply. Dual compliance was thus, not impossible.