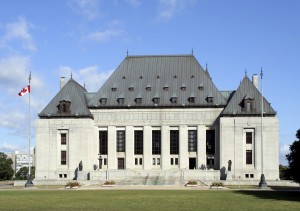 Mr. Potter was the (non-unionized) Executive Director of the New Brunswick Legal Aid Services Commission on a fixed seven-year term. Four years into his contract, Mr. Potter and the Commission began negotiating a buyout of his contract. Mr. Potter then took medical leave and delegated his powers and duties to another individual.

At first instance, the trial judge held that the Commission’s actions did not amount to constructive dismissal: it had statutory authority under the New Brunswick Legal Aid Act to administratively suspend Mr. Potter with pay. In addition, by commencing a constructive dismissal claim, Mr. Potter repudiated his employment contract and had thus, resigned.

Mr. Potter’s administrative suspension with pay for an indefinite period of time was a unilateral change by the Commission. It did not have express or implied authority to suspend Mr. Potter, which meant that the suspension was a breach of his employment contract. The Commission failed to establish that the suspension was reasonable or justified. The Court applied the newly-created “duty of good faith contractual performance” from its recent decision in Bhasin v. Hrynew, 2014 SCC 71, noting that good faith “means being honest, reasonable, candid, and forthright”. We wrote about the duty of good faith in our Litigator post: It’s no lie: Supreme Court recognizes contractual duty of good faith.

Because it made a finding that Mr. Potter was constructively dismissed, the Supreme Court did not need to decide whether Mr. Potter had resigned by virture of commencing his law suit.

The Two-Part Test for Constructive Dismissal in Canada


The Supreme Court set out the two-part test as follows:

The first branch of the test – itself a two-step approach – requires a court to review the terms of the employment contract to determine whether:

Whether a breach occurred is determined on an objective standard. Circumstances where an employer has express or implied authority to make a change, or an employee consents to such a change, will not amount to a unilateral change or breach. An employer’s change must be detrimental to the employee to be considered a breach.

Therefore, constructive dismissal can occur in one of two ways:


Relevant factors to determine whether a suspension is reasonable and justified include but are not limited to,

Failure to provide an employee with any reasons for an administrative suspension in most circumstances will cause problems for employers.