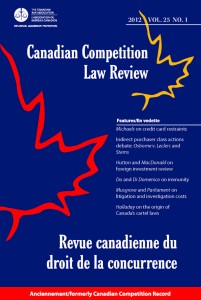 Indirect purchasers of a product that was the subject of a price fixing conspiracy cannot sue to recover losses passed on to them by direct purchasers, the British Columbia Court of Appeal ruled in two landmark decisions issued recently. These decisions are now being appealed to the Supreme Court of Canada.

The US Supreme Court rejected the conjoined concepts of passing-on as a defence and passing-on as giving rise to a cause of action by indirect purchasers in two landmark decisions, Hanover Shoe (1968) and Illinois Brick (1977). The issue of whether indirect purchasers could claim in Canada first arose in Chadha v. Bayer. The Ontario Court of Appeal refused to certify the class because no method of proving loss on a class-wide basis had been proposed, but it declined to adopt a rule barring indirect purchaser claims. In subsequent cases, plaintiffs evolved three techniques of avoiding Chadha: (a) combining direct and indirect purchasers into one class; (b) relying on causes of action that may not require proof of loss, in order to invoke aggregate assessment of damages; and (c) leading economic evidence regarding pass on. While these tactics worked, they were really only ways of postponing the hard questions about proving damages suffered by indirect purchasers.

Then in two cases, Canfor and Kingstreet, the Supreme Court of Canada definitively rejected passing on as a defence. This lead the BC Court of Appeal to rule in 2011 that because the passing on defence could not be used to reduce direct purchasers’ recovery, they were entitled to recover the entire overcharge, leaving nothing for the indirect purchasers. Thus, any loss suffered by indirect purchasers is not one recognized by law.

In the author’s opinion, the BC Court of Appeal is right: rejection of defensive passing-on necessary entails rejection of offensive passing-on. Allowing indirect purchaser claims requires allowing the passing-on defence, or tolerating double recovery. However, indirect purchasers, particularly consumers, would gain little if they were allowed to claim, since consumers have never been compensated directly in Canada: allocations have always been distributed cy-près to non-profit entities. By contrast, allowing indirect purchaser claims would add greatly to the cost and complexity of trials of price fixing class actions. As well, allowing the passing-on defence would have negative repercussions on other cases.

[The above is the abstract from Michael Osborne, “The Loss Stops Here: Should Indirect Purchasers be Able to Sue for Price Fixing Losses?“, 25 Can Comp L Rev 50.]