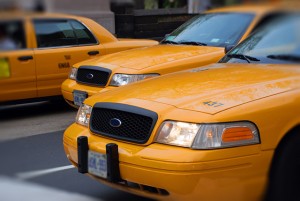 The Ontario Superior Court of Justice quashed a resolution of Toronto City Council that required the mandatory conversion of all taxi licences to a new taxi licensing regime on the basis that it was illegally passed. Given the significant impact of that change, the Court exercised its discretion to quash the resolution. The remainder of a new taxi licensing regime was found to have been validly enacted and was thus, upheld.

(n.b. Michael Binetti and Fiona Campbell acted as counsel for the Toronto Taxi Alliance in this case.)

In the case of Toronto Taxi Alliance Inc. v. City of Toronto, Justice D.G. Stinson dealt with a dispute about changes made by Toronto City Council in February and June 2014 to the regime governing taxicab licensing. The City of Toronto changed the taxi licensing system in Toronto from a two-tiered model to a one-tiered, owner-operated model. The former taxi licensing system included three forms of taxi owner licences: Standard Taxicab Owner Licences (“STL”), Ambassador Taxicab Owner Licences (“Ambassador”), and Accessible Taxicab Owner Licences (“Accessible”). A new form of licence to be known as the Toronto Taxi Licence (“TTL”) would eventually replace the former three licences. The TTL would have more favourable conditions attached to it than were attached to Ambassador licences, but would reduce some of the benefits attached to STLs.

The Applicant, the Toronto Taxi Alliance (“TTA”) commenced this application under s. 214 of the City of Toronto Act, 2006 seeking to quash the February 2014 resolutions (and, ultimately, the June 2014 by-law amendments) on the ground that the City failed to give proper notice regarding its intention to enact the changes, failed to follow its own procedural rules, and acted in bad faith

History of Taxi Licences in Toronto

Before 1998, all taxicab licences in Toronto were STLs. Since at least 1963, STL holders have been permitted to sell their licences at market value. Since 1974, those who hold STLs have not been required to drive their own cars, and often lease their licences to brokerages and fleet services, which in turn employ shift drivers.

In 1998, a comprehensive review of the taxi licensing system conducted by the City disclosed significant issues, including the prevalence of middlemen, absentee owners and passive investors, which were said to have caused deterioration in the condition of vehicles and in the quality of customer service. In response, City Council implemented by-laws that created a new class of owner-operated taxicabs (Ambassadors), ended multiple leasing of taxicabs, and mandated that only licensed taxicab drivers could purchase taxicabs. The City also stopped issuing STLs, but STLS could still be bought and sold.

By 2011, the City determined that further changes were necessary. While the Ambassador licence did improve the quality of taxicab service and increased the incomes of many drivers, shortcomings remained, the application judge referenced: long hours resulting from the requirement that only Ambassador owners could drive their own cabs; non-transferability of licences such that drivers felt they could not retire; and inequity between STLs and Ambassadors.

In January 2014, Toronto City Staff produced a report containing some 40 recommendations, the first 10 of which related to the institution of the new TTL. Some key characteristics of the TTL included:

The Final Staff Report said nothing about a mandatory conversion date by which all STL licence holders would have to convert their licences to TTLs.

The Dispute Over How The Staff Recommendations Were Adopted

At a meeting of the City’s Licensing and Standards Committee, the recommendations concerning the TTL were referred back to staff for a further report (“Referred Recommendations”). The TTL was not sent to a subsequent City Council meeting to be voted on. At that meeting, a City Councillor moved to adopt the entirety of the TTL regime. Moreover, Council adopted a motion to change to the date on which STLs would convert to TTLs upon sale from January 1, 2019 to July 1, 2014 and also adopted a motion to require all taxi licences be converted to TTLs by June 30, 2024.

The applicant sought to quash the resolutions and by-law amendments by which the TTL regime was enacted, on the grounds of illegality arising from procedural unfairness and bad faith. It argued that no proper notice was given that the TTL regime would be considered at Council meeting; that both the amendment to the start-date for the conversion of STLs to TTLs upon sale and the amendment imposing an end date of June 30, 2024 were improper and arbitrary; and that the by-law amendments should be quashed for illegality because the procedural breaches were more than merely technical and are tantamount to bad faith.

The City argued that the court was required to give significant deference to legislative decisions made by a municipal body. It said that proper notice was given that the Referred Recommendations would be before Council at its meeting on February 19 by reason of their inclusion in the published agenda. The City argued that the court must also give deference to the City’s interpretation of its own procedural by-laws, which are distinguishable from statutorily mandated procedures.

The TTA argued that a member of the public who attended the Committee meeting prior to the Council meeting whereby the TTL was adopted would have come away with the understanding that the Referred Recommendations (and thus the TTL proposal) were to be the subject of additional study and were not to come back for consideration until February 2015. Indeed, the City’s procedural by-law contained notice requirements of varying sorts to that end.

The application judge found that the topic of potential reforms to the Toronto taxi licensing regime was the subject of extensive study and consultation over the period 2011 to 2014. Having regard to the known practices of City Council with respect to the scope of consideration of referred recommendations, and the fact that the TTA had past engagement with the City in this matter, the application judge found that the TTA and most other interested stakeholders knew that the potential enactment of the TTL regime was among the recommendations that were to be considered at the City Council meeting in February 2014.

The application judge referred to the Ontario Court of Appeal decision in Friends of Lansdowne Inc. v. Ottawa (City), to the effect that “assuming the absence of bad faith, any technical failure on the part of the municipality to adhere to its internal rules and procedures is an irregularity that does not vitiate the challenged decision.” His Honour found as a fact that Toronto City Council had historically treated entire staff reports as being before it, which in this case meant that the Referred Recommendations were also before it. In light of the deference due to municipalities, the application judge found that it was not for the court to intervene. Only evidence of bad faith or fraudulent intent would enable the courts to give effect to technical objections founded upon an alleged failure by a municipal council to follow its established procedures. The application judge did not find that the alleged rose above the level of procedural irregularity, subject only to the issue of the mandatory conversion deadline discussed below.

No Notice of Mandatory Conversion

On requiring STLs to be converted to TTLs, the application judge found that the final Staff Report said nothing about a mandatory conversion date for STLs to become TTLs. In fact, the Staff proposal was to allow all STLs owners to continue to enjoy the benefits of that category of licence as long as they were alive and continued to own the licence. There was no mention of a date or deadline for conversion. This issue was not on the published agenda for the February 2014 Council meeting, most likely because it had not been raised previously. It first arose during the course of the Council debate concerning the TTL regime. During that meeting, without any prior notice, a motion was proposed and passed to establish June 30, 2024 as the final date for owners of STLs and Ambassador licences to convert them to TTLs.

Courts, in the spirit of deference, have consistently refused to quash by-laws for “technical failure of the municipality to adhere to its internal rules,” the effect and significance of a substantive breach of these rules was an open question for the application judge. Citing earlier Ontario appellate jurisprudence, the application judge found that the court was not precluded from intervening and quashing a by-law when a municipality’s failure follow its procedural by-law was “an error of a substantive nature going to the root of the validity of the by-law” and that no court had held that a substantive breach of a procedural by-law could not result in court intervention.

The failure of the City to provide notice of its intention to enact the 2024 mandatory conversion deadline, the application judge held, rose to the level of a “substantive breach.” It was a breach of the notice required in the City of Toronto Act, 2006 with the result that no notice was given of a significant potential legislative step. Such an omission went to the heart of the notice requirement – to facilitate transparency and participation in the democratic process —and could not be called merely technical. That requirement would have serious economic repercussions for STL licence-holders. It would have removed from them, at a future date, their existing rights and benefits upon which many of them depended for their livelihood and for which they may well have paid a significant amount of money. There was no advance study or consideration of the impact of that provision before the City enacted the 2024 date and stakeholders were not given an opportunity to make representations on alternative dates or solutions.

Not Quite Bad Faith

In Ontario, municipal by-laws are presumed to have been enacted in good faith, and there is a high burden on an applicant seeking to establish bad faith: Seguin (Township) v. Hamer, 2014 ONCA 108 (CanLII).

The applicant argued that the actions of City Council in choosing to deal with the Referred Recommendations in the face of the Committee’s referral of the TTL regime for further staff study, were unreasonable, unfair and arbitrary. It focused specifically on the alleged arbitrariness and unfairness of Council in amending the implementation dates in the Referred Recommendations. As discussed above, the application judge held that there was no procedural unfairness in Council enacting the TTL, nor in imposing a 2014 start date. While the implementation of an end date of 2024 was in substantive breach of the Procedural By-Law regarding notice, the application judge went on to note, he did not think that Council’s actions in passing this part of the by-law this rose to the level of bad faith. The lack of notice was not a deliberate attempt by City Council to keep stakeholders in the dark.