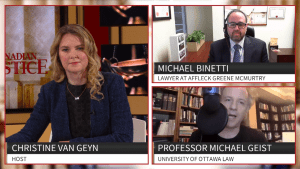 Hosted by Christine Van Geyn, “Canadian Justice” welcomes advocates and lawyers on both sides of some of the most polarizing constitutional freedom cases involving Canadians today.

Michael Binetti and Professor Michael Geist’s segment starts at the 11:00 mark of the program.