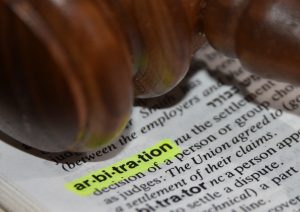 Ontario remains an arbitration-friendly jurisdiction, the Ontario Court of Appeal has confirmed in its recent decision in Haas v. Gunasekaram. In overturning a motion judge’s refusal to stay proceedings under s. 7(1) of the Ontario Arbitration Act, the Court emphasized that courts should enforce arbitration agreements where possible and set out an analytical framework to be used in determining whether a stay of proceedings should be granted.

The arbitration agreement in the shareholders’ agreement provided:

If at any time during the currency of this Agreement, or after the termination hereof, any dispute, difference, or question shall arise, or any failure to agree as specifically hereinabove referred to, shall occur among the parties hereto or certain of them, respecting this Agreement or anything herein contained then every such dispute, difference or question or failure to agree shall be referred to a single arbitrator to be appointed by the parties to the dispute within ten (10) days of such referral …

The motion judge refused to stay Haas’s action, determining that the “pith and substance” of most of the claims advanced by Haas related to the fraudulent misrepresentation of facts that caused Haas to enter into the shareholders’ agreement, and were not contractual claims. Accordingly, he concluded that Haas’s claims were outside the scope of the arbitration agreement.

On appeal, the court reviewed the evolution of both the governing statute and the case law, concluding that both heavily favour giving effect to arbitration agreements wherever possible. The court then set out and applied the following analytical framework for determining whether to grant a stay under the Arbitration Act:

There was no dispute between the parties that there was an arbitration agreement and that it was broad in scope. The main issue arose out of the second part of the framework – the subject matter of the dispute. Although the “pith and substance” approach used by the motion judge was not in error, the appeal court disagreed with the result. The Court held that defendants’ alleged failures were really failures of the defendants to perform their obligations under the shareholders’ agreement, and not true misrepresentations.

Lastly, the court was unable to find any grounds on which the court should refuse to stay the action. Haas pointed to the a possibility of a multiplicity of proceedings. The court rejected this argument, emphasizing that “the court should not lightly depart from the strong policy support for enforcing arbitration agreements.”

This decision highlights that Ontario remains an arbitration friendly jurisdiction. Where an arbitration agreement is broad in scope, this decision should serve as a reminder that strategic pleading of tort or fraud claims will not automatically remove a dispute from the jurisdiction of an arbitrator and a motion for a stay of proceedings will likely succeed. Parties to arbitration agreements must draft them with care and should consider explicitly excluding tort or fraud claims if that is what they intend.