Judges Can Sit in Other Provinces: Supreme Court

Superior Court judges can sit outside their home provinces, the Supreme Court held today. This decision will facilitate the management of national class actions and other inter-provincial litigation in Canada. 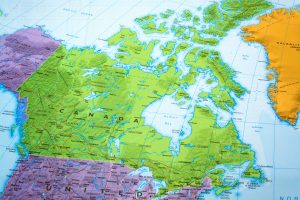 Join the judiciary and see the country!

The issue arose in connection with the national settlement in the tainted blood class action that was approved in 1999. Class counsel wanted to extend the time for filing claims for benefits from the settlement funds. Since the court-approved settlement assigned supervision of the settlement to courts in BC, Ontario, and Quebec, the motion had to be brought before all three courts, and all three courts had to agree on the outcome for the decision to take effect. Class counsel proposed that the three judges should hear the motion sitting together in one location. The three provinces opposed this, however, claiming that superior court judges cannot sit outside their home province. Ultimately, the Ontario Court of Appeal held that judges can sit outside Ontario, but that there must be a videolink back to Ontario. The BC Court of Appeal disagreed, citing pre-Confederation common law principles of territoriality.

The Supreme Court held that the broad, general power to manage class proceedings found in the Class Proceedings Act in both Ontario and BC gave the courts the authority to sit outside of their home provinces. The common law does not prevents this, nor does the Constitution or any statute, the court added. While there is a “deep seated sense” in the common law that courts conduct their business within their geographical boundaries, the type of hearing at issue did not engage concerns relating to extra-provincial exercise of a judge’s coercive power, since the hearing was on a paper record.

Superior court judges also have an inherent jurisdiction to sit outside their home provinces, the court added, unless there is a statutory limitation prohibiting this.

The court also held that the open court principle does not mean that a video link is required as a pre-requisite to an out-of-province hearing. “If holding the hearing in the home jurisdiction without a video broadcast does not violate the open court principle, the fact that the hearing is being held in a publicly accessible location outside the province does not necessarily do so either”, Cromwell J. wrote. He suggested, nevertheless, that video links would be the norm.

Writing for the majority, Cromwell J. elaborated broad considerations to be considered by a superior court judge in deciding whether to sit outside his or her home province:

In concurring reasons, Wagner J. went further still, holding that if members of the public, the media, or counsel request a video link, that request should generally be granted.

The court declined to rule on whether its decision is limited to cases where a judge will not exercise any of the court’s coercive powers, including, for instance, the power to direct a witness to appear and to answer questions.

Interestingly, the court did not expressly confine confine its decision to cases where a judge proposes to sit in another province in Canada; the court merely held that a judge can sit outside his or her home province. This leaves open the possibility that a Canadian judge might sit with a foreign judge in another country to manage a cross-border proceeding. Something like this has already happened: a trial to determine allocation of assets in the Nortel bankruptcy proceedings was conducted simultaneously before the Ontario Superior Court and the US Federal Court in Delaware, using a video link.

This decision is a welcome one. The modern reality of class proceedings is that they typically encompass national classes. Because Canada lacks a US-style federal court to unify these proceedings, the superior courts in each province must cooperate to make national classes manageable. This decision makes this cooperation easier. As Cromwell J. noted:

It is also a practical alternative that serves the underlying purposes of class proceedings. To take too dogmatic a stand on this point, as Winkler C.J.O. noted, risks leaving the common law unsuited “to modern realities of increasingly complex litigation involving parties and subject matters that transcend provincial borders”: para. 25.