Canada’s Anti-Spam legislation, commonly known as “CASL”, establishes an “opt-in” regime by making it presumptively unlawful to send a commercial electronic message (CEM), unless the recipient has consented to receive it, and the sender includes certain information and an unsubscribe mechanism. CASL applies to anyone who uses email for any commercial purpose. Violators face heavy sanctions, including fines up to $10 million, and private damages actions.

What is a commercial electronic message?

The definition of a CEM is not based on whether the messages are sent in bulk. One-off emails sent by individuals that have a commercial purpose are caught by CASL.

There are two kinds of consent to receive a CEM:

Express consent can be given orally or in writing. The person seeking consent must set out “clearly and simply”:

Consent is frequently obtained through check boxes on web pages. These check boxes must start out unchecked, not checked.

Because electronic messages seeking consent are deemed to be CEMs, express consent cannot be sought by email, unless there is implied consent, or one of the exceptions applies.

A transitional provision in CASL allows an initial three-year period, until July 1, 2017, before implied consents for existing business and non-business relationships expire. Implied consents arising from business cards and website contact information do not expire.

Information and contents that must be in CEMs

Regulations made by the Canadian Radio-telephone and Telecommunications Commission (CRTC) allow the sender information and unsubscribe mechanism to be posted on a web page, with a link in the message, when it is not possible to include this in the CEM itself, for example, on text messages.

Unsubscribe requests must be honoured within ten business days.

CASL and the regulations made under CASL contain several sets of exceptions.

The first set consists of a list of particular circumstances in which CEMs can be sent without the need to obtain consent, but where the sender information and unsubscribe mechanism may still be required, including:

Depending on the circumstances, some of the messages listed above may not be CEMs at all, and may thus be completely exempt from CASL.

The second set consists of CEMs that are exempt both from the requirement to obtain consent and to include sender information and an unsubscribe mechanism in certain circumstances, including:

Telephone calls, faxes, and “robocalls” are also exempted from CASL. They are regulated by the CRTC through its “Do Not Call List”. Voicemails are also likely exempt.

CASL contains a number of other provisions that are beyond the scope of this summary:

The CRTC is responsible for enforcing CASL. The CRTC investigates, prosecutes, and adjudicates alleged violations of CASL.

The CRTC can order telecommunication service providers to preserve data about CEMs. It can order anyone to produce any document, information or data, including private emails and text messages. The CRTC does not need to obtain prior judicial authorization before issuing a production order. The CRTC can also apply to a court for search warrants.

If the CRTC determines that a violation has occurred, it can issue a notice of violation and impose an administrative monetary penalty (AMP) of up to $1 million on an individual and $10 million on a corporation, without holding a hearing. It is up to the alleged violator to challenge the decision by proving either that the recipient of the CEM consented (expressly or impliedly), or that it exercised due diligence to avoid committing the violation. Parties found to have violated CASL can appeal to the Federal Court of Appeal.

Persons who are affected by violations of CASL can sue to recover actual damages, plus up to $200 for each contravention, to a maximum of $1 million per day on which a contravention occurred. This private right of action is also available in cases of violations of the online false advertising provisions added to the Competition Act by CASL. Private actions under CASL will almost certainly be structured as class actions. The private action provisions come into force on July 1, 2017.

UPDATE: the government has delayed the coming into force of the private action provisions indefinitely, pending a parliamentary review. 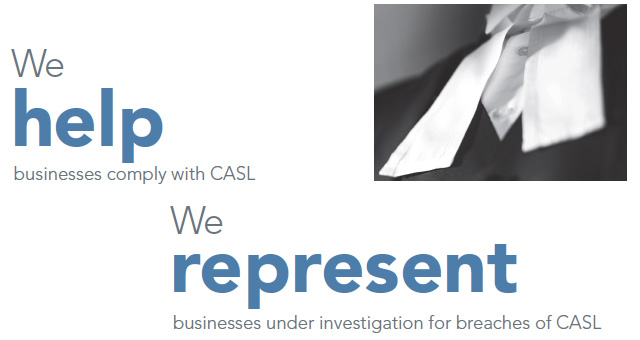